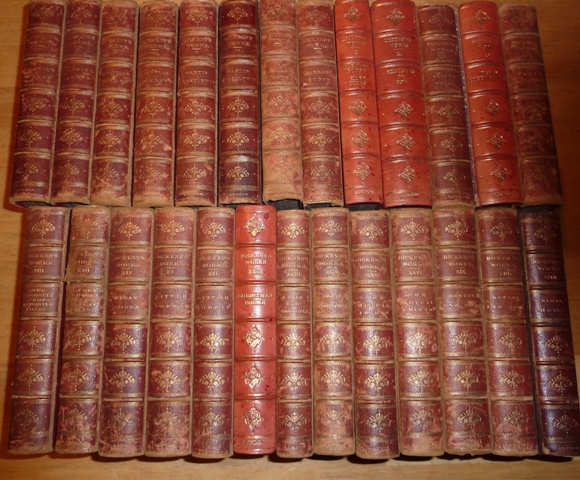 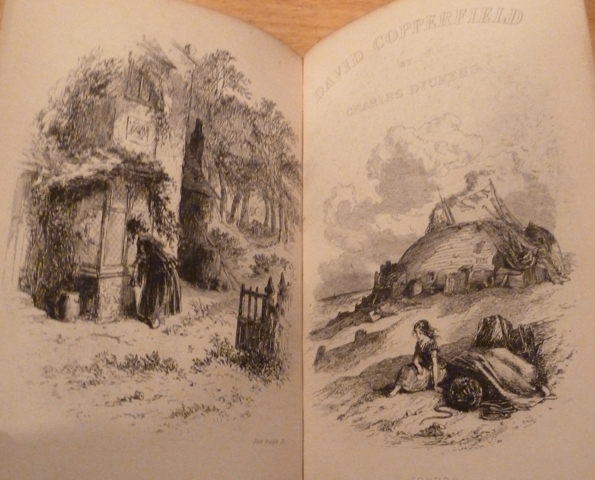 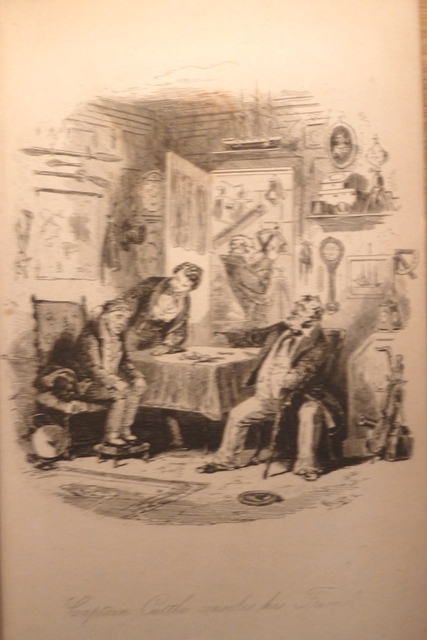 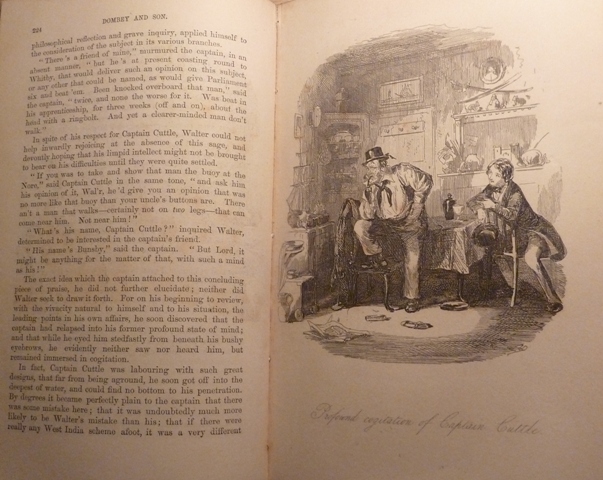 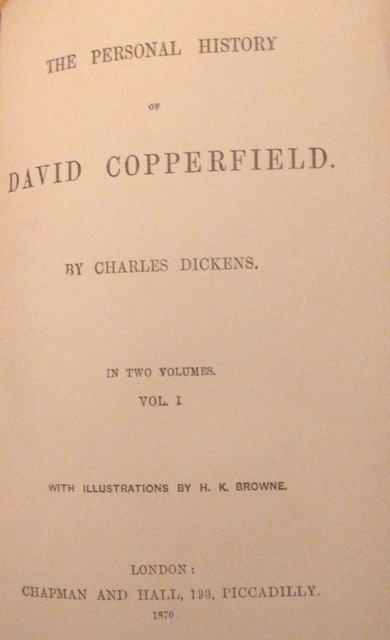 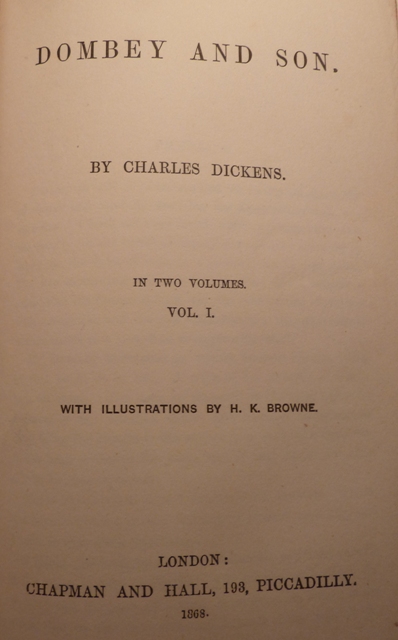 VGC.Chapman & Hall, London ,1860's-1870's.Illustrated Library Edition of the Works of Charles Dickens in complete 26 octavo volumes(I to XXVI).This set was reissued between 1861 and 1874 with illustrations and was called the Illustrated Library Edition.Hardbacks(marbled front and back covers, gilt lettering to the spine) bound in mainly contemporary half leather(four volumes are in more recent half leather, small nicks and dents on the edges of the covers and spines) in VGC. Illustrated with many b/w plates.Nice and clean pages with small ink marks,creases and nicks on the edges of the pages,small foxing marks inside some of the pages, pages 49-50 in volume I are slightly loose, previous owner's name written on a sticker inside the front cover of each book except for 4 volumes, marbled endpapers and edges of the pages. The front cover of volume XII has come loose but is repairable. Illustrations by George Cruikshank, H. K. Browne.The collection is in VGC for its age with light shelf wear. A collectable and scarce early edition of The Works of Charles Dickens. Please note: This is heavy set(approx 22 Kg). Books sizes: 7.9 x 4.9 inches.

The books are as follows: The Posthumous Papers of the Pickwick Club ( 2 volumes, no date given but probably 1867), Nicholas Nickleby(2 volumes, dated 1869), Martin Chuzzlewit(2 volumes, dated 1969), Old Curiosity Shop & Reprinted Pieces(2 volumes), Barnaby Rudge(2 volumes including Hard Times), Sketches by Boz,Oliver Twist(dated 1868), David Copperfield(2 volumes,dated 1870), Pictures from Italy, Bleak House( 2 volumes,dated 1867), Little Dorrit( 2 volumes, dated 1862 & 1867), Christmas Books(dated 1868), Tale of Two Cities, Great Expectations( dated 1866), Our Mutual Friend(2 volumes, dated 1869), Dombey and Son(2 volumes, dated 1868).The Posthumous Papers of the Pickwick Club includes Charles Dicken's preface(in his preface to the 1867 edition, Dickens strenuously denied any specific input, writing that Mr Seymour never originated or suggested an incident, a phrase, or a word, to be found in the book.). Also, on the second page of the The Posthumous Papers of the Pickwick Club volume I, it is printed: The Best Edition of my Books Is, Of Right, Inscribed to my Dear Friend John Forster, Biographer of Oliver Goldsmith. Many Patient Hours he has Devoted to the Correction of the Proof Sheets of the Original Editions; And in Affectionate Acknowledgement of His Councel, Sympathy, And Faithful Friendship During My Whole Literary Life.

Later Editions: Upon completion of serialization the works were issued as complete novels in one to three volumes with original, and in some instances, additional illustrations. Starting in 1847 the older novels were reissued in what was called the Cheap Edition, these were published in weekly and monthly parts, and then as complete novels. Eventually all of Dickens' novels were reissued in the Cheap Edition. The concept of the Cheap Edition was similar to today's practice of reissuing hardback novels as more affordable paperbacks. Other editions published during Dickens lifetime include the Library Edition: a high quality set published without illustrations in 1858/59. This set was reissued between 1861 and 1874 with illustrations and was called the Illustrated Library Edition. In 1867 the Charles Dickens Edition was released. This edition featured new prefaces, written by Dickens, who also made minor corrections to the text. Chapman and Hall produced the Peoples Edition in 1865-1867, these were inexpensive monthly installments of the novels aimed at travelers in the very popular bookstalls popping up in railway stations all over Britain. Dickens' works were also published in America, sometimes simultaneously with the British edition and often with little or no compensation to the author or his publishers due to the lack of an international copyright law. Dickens campaigned unsuccessfully for international copyright during his first American visit in 1842. An English-American copyright law would not be enacted until 1891. Dickens novels continue to be published today in popular series like the Oxford Illustrated Edition, which include the original illustrations, and the Penguin English Library's paperback edition.

About the Author: Charles Dickens was born in 1812 near Portsmouth where his father was a clerk in the navy pay office. The family moved to London in 1823, but their fortunes were severely impaired. Dickens was sent to work in a blacking-warehouse when his father was imprisoned for debt. Both experiences deeply affected the future novelist. In 1833 he began contributing stories to newspapers and magazines, and in 1836 started the serial publication of Pickwick Papers. Thereafter, Dickens published his major novels over the course of the next twenty years, from Nicholas Nickleby to Little Dorrit. He also edited the journals Household Words and All the Year Round. Dickens died in June 1870. 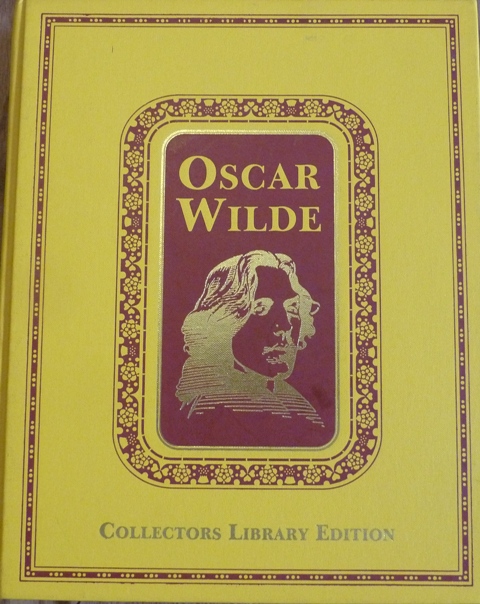 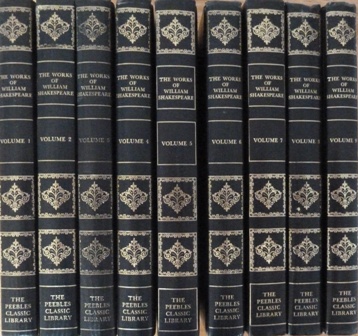 The Works of William Shakespeare in 9 volumes 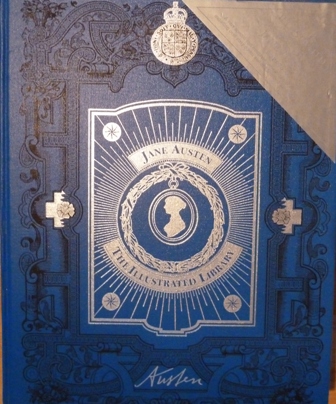 The Wind in the Willows (Collector's Library) 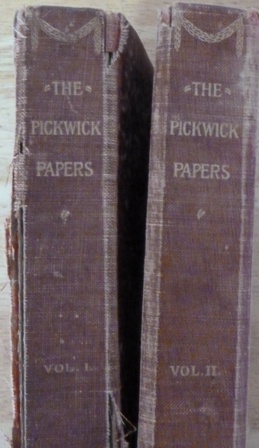 The Posthumous Papers of the Pickwick Club (two volumes)

The Making of Shakespeare's First Folio 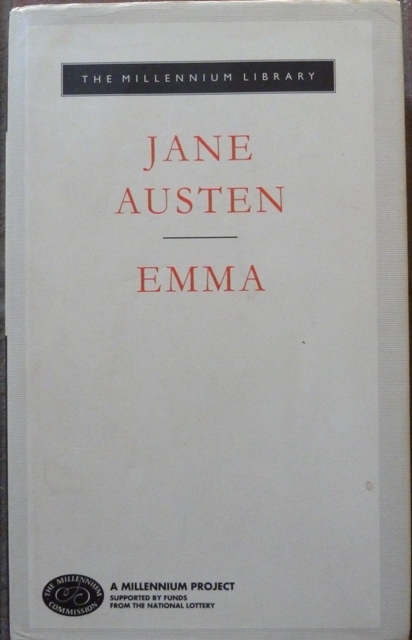 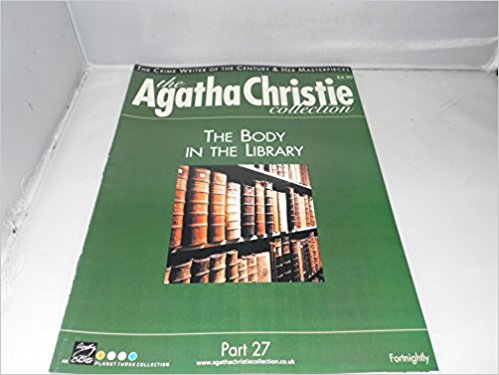 The Agatha Christie Collection Magazine: Part 27: The Body in The Library

By: Alcott, Louisa May

The Novels of Thomas Hardy 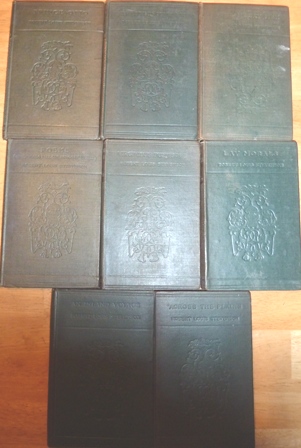 The Works of Shakespeare: Comedies, Memoir and Essays