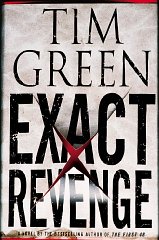 VGC.Warner Books,2005.First US edition-first printing(10 9 8 7 6 5 4 3 2 1).White hardback with black borders(red lettering to the spine,scratch and nick on the cover) with Dj(very small mark on the edge of the back Dj cover from a price sticker,two small nicks and crease on the Dj cover),both in VGC.Nice and clean pages but with a black marker mark on the outer edges,small pencil mark impression on the edge of the first blank page of the book.The book is in VGC except for marker mark on the outer edge of the pages.354pp.Price un-clipped.First edition-first printing.

From Publishers Weekly: The world is Raymond White's oyster: a working-class boy from Syracuse who made good, he's got a Princeton degree, rugged good looks and the gorgeous girlfriend to match, and partner status at a law firm by age 25. But in this lively modern-day retelling of The Count of Monte Cristo, just as White is poised to run for Congress, he is framed for murder, convicted and thrown into solitary confinement. After almost two decades of hard time, White is befriended by a fellow prisoner, lifer, thief and part-time murderer, Lester Cole. Exact revenge.... If you don't do it, you'll be a professional victim. You exact it and it's exact. Not just a reaction, but planned out. Precise. It needs to send a message, Cole advises, beginning his tutelage about life, literature and the location of a billion dollars worth of loot that they'll split after they escape. Cole dies in the breakout through the sewers of the Big House, but White goes on to retrieve the money and put in motion his reprisal plan against the former colleagues who framed him for murder. White takes down his enemies one by one in a fun, fast-paced update on the Dumas formula that will have readers booing the bad guys and rooting for the wronged hero.