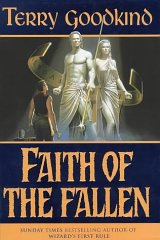 Faith Of The Fallen: Book 6: The Sword of Truth

From Publishers Weekly: Sequel to Soul of the Fire in Goodkind's popular Sword of Truth series, this extended barrage of sword-swinging fantasy pits the New World's Seeker of Truth, Richard Rahl, and his wife, Mother Confessor Kahlen Amnell, against the lethal totalitarian forces of the Imperial Order under Jangang the Just and his gorgeous masochistic minion Nicci, aka Death's Mistress, a dreaded Sister of the Dark. After Richard helps a desperately wounded Kahlen heal in a mountain hideaway guarded by their ill-tempered blonde bombshell bodyguard, Cara, Nicci ensorcels Kahlen and forces Richard to abandon her for inhuman bondage in the Order-dominated Old World. Kahlen defies Richard's prophecy that arms alone will never defeat the Order. She takes command of the D'Haran army, hopelessly outnumbered against Jagang's black-magicked hordes who are invading the New World. Untangling all this gives Goodkind an ample canvas for enough disemboweling, spit roasting and miscellaneous mutilating of men, women and children to out-Sade the infamous marquis. His fansAand they are legionAwill revel in vicarious berserker battle scenes and agonize deliciously as Richard, reduced to slavery by Nicci, toils to establish a bastion of capitalism in the cold gray heart of the Stalinesque Old World. All the ponderous sound and fury of Goodkind's attack on socialist-style do-gooders who are destroying the world, however, founders in a welter of improbable coincidences, heavy-handed humor and a disconcerting dependence on misusing the verb smirk.

Title: Faith Of The Fallen: Book 6: The Sword of Truth

Keywords: Literature & Fiction Faith Of The Fallen: Book 6: The Sword of Truth,

Faith Of The Fallen: Book 6: The Sword of Truth