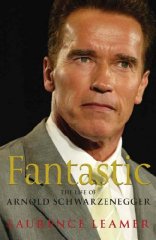 Fantastic: The Life of Arnold Schwarzenegger

Near fine/VGC.Sidwick & Jackson,2005.First UK edition-first printing(1 3 5 7 9 8 6 4 2).Green hardback(gilt lettering to the spine,two scratches on the cover) in near fine condition, with Dj(small tear on the edge of the back Dj cover,small nicks,creases and scratches on the Dj cover) in VGC.Illustrated with b/w photos.Nice and clean pages with a small ink mark and nick on the outer edges,small nicks and a couple of small creases on the edges of the pages.Nice and clean book with light shelf wear on the back of the Dj cover.427pp including Bibliography,notes,films and index.Price un-clipped.

Product Description:The life of Arnold Schwarzenegger is one of the most extraordinary success stories of our time. Born in a village in Austria, he became the greatest bodybuilder in history and then the number one movie star in the world. Today, he is the Republican husband of a Kennedy princess, and the governor of the greatest of American states. Leamer has had exclusive interviews with Arnold Schwarzenegger and his closest associates, including his Austrian schoolfriends, his mentors, bodybuilding competitors, lifelong friends, first serious girlfriend, political rivals, agents, publicists and producers, many of whom have never been interviewed before. The resulting biography is studded with revelations - from the untold story of his traumatic relationship with his father to how his first mentor, a Jewish partisan in the Second World War helped shape him; from the movie star who tried to ruin his career to why Arnold married Maria Shriver and the startling story of their wedding day; from how Arnold overcame the sordid sexual revelations that marred his campaign for governor of California to the game plan that may bring him to the White House. Insightful, highly entertaining, this book captures the public and private Schwarzenegger, a cultural and political figure unlike any other. n nAbout the Author nLaurence Leamer's previous titles include The Kennedy Women, The Kennedy Men and Sons of Camelot.

Fantastic: The Life of Arnold Schwarzenegger