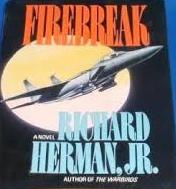 Near fine condition.Hodder & Stoughton,1991.First UK edition.Brown hardback(gilt lettering to the spine,nick and scratch on the cover) with Dj(very small tear,nick and a couple of creases on the edges of the Dj cover),both in near fine condition.Nice and clean pages with a small ink mark & light shelf wear on the outer edges,two small creases on the edges of the pages,small pencil mark impression on the edge of the first blank page of the book.375pp including Glossary.Price un-clipped.A collectable first edition.

From Publishers Weekl: Master of the techno-thriller, Herman ( The Warbirds ) moves from the tactical level to the strategic with this fast-paced novel of a Middle East Armageddon. In this near-future scenario, Iraq, incautiously allowed to recover fully from the Second Gulf War, joins Egypt and Syria to attack Israel, whose premier is ready to use nuclear weapons as a firebreak if Iraq employs its newest, deadliest nerve gas. The grandson of U.S. President Matthew Pontowski leads the 45th Tactical Fighter Wing on a desperate mission against Iraq's chemical plants. Herman's ground and air action, particularly in the book's final 100 pages, are as exciting as any in print, and the characters, including the President, his grandson and Shoshana Tamir, the disillusioned Israeli agent who is the young fighter pilot's love interest, are convincing. Herman is less successful, however, when he moves far from the fighter's cockpit--to, for instance, the Oval Office, where depictions of the infighting surrounding American policy-making seem like vignettes, interesting but incomplete.