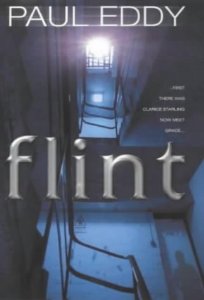 Mint condition.Headline-Feature,2000.First edition-first printing(10 9 8 7 6 5 4 3 2 1).Blue hardback(silver lettering to the spine,nick/dent on the edge of the front cover) with Dj(two small creases,nicks and scratch on the Dj cover),both in mint condition.The book is new with a small ink mark and light shelf wear on the outer edges of the pages.374pp.Price un-clipped.

Review: At the heart of this thriller lies an idea that is familiar to fans of the genre -that of the victim wreaking vengeance after recovering from a near fatal attack. Eddy's variant on a theme is one of the better ones, as undercover cop Grace Flint returns to the force after reconstructive surgery. She has been the victim of a vicious attack by a murderous money launderer, and has had plenty of time in recuperation to brood on her attacker's guilt. Has her personality been damaged by the course of events, both in the present and by a trauma from her childhood? Fortunately Eddy draws his central character sympathetically and convincingly, and the reader cares for the heroine as she treads through the labyrinthine and fast moving plot.