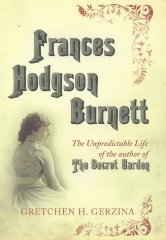 Frances Hodgson Burnett: The Unpredictable Life Of The Author Of The Secret Garden [Illustrated]

Product Description: Based on letters and journals and youthful ledger books never before made available, and on interviews with descendants, this is a full and lively life of the prolific Victorian writer and playwright, who was hugely famous in her own time (1849-1924) for her adult novels and plays and a handful of children's novels (including Little Lord Fauntleroy, based on one of her sons), but who has stood the test of time as the much-loved author of every girl's favourite classics, The Secret Garden and A Little Princess. She came of modest beginnings in Manchester in the mid 19th century and moved to post Civil War Tennessee as a teenager when her mother was left widowed and impoverished with several children and emigrated to join her brothers in the Deep South. A woman of contrasts and paradoxes, Frances was as much American as she was British. This quintessentially British-seeming writer was equally at home in the US, and claimed as American (she has a memorial in Central Park!), and it's this that makes her and her work so fascinating. She made and spent masses of money and constantly worried about it, was profligate and generous, dressed expensively and ostentatiously (for her diminutive size), was obsessively hardworking, hard-headed, flighty, depressive, clever (though not well educated). She made an early marriage to a Southern doctor which wasn't a great success but was kept going for 'appearances'. She had several flirtations and ended up living scandalously with an actor/writer whom she finally married and then rejected dramatically - he may have been physically as well as mentally abusive. She understood the intensity and loneliness of the thoughtful child, but tended to leave her own two sons for months at a time. One of her adored but neglected sons died in his teens. The other never got over being the model for Little Lord Fauntleroy. She hankered after a kind of grand Englishness - which she finally achieved as lady of the maor at Maytham Hall in Kent, where there was and still is a beautiful walled (secret) garden. She belonged everywhere and nowhere, and was constantly restless and inventive. There was a neediness and childish simplicity about her which is explored here and may be the key to why it is her children's books that have such lasting appeal.

Title: Frances Hodgson Burnett: The Unpredictable Life Of The Author Of The Secret Garden [Illustrated]

Frances Hodgson Burnett: The Unpredictable Life Of The Author Of The Secret Garden [Illustrated]