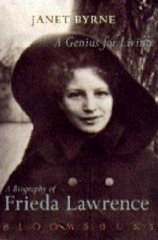 A Genius for Living: Biography of Frieda Lawrence

Product Description: This biography defies the conventional portrait of Frieda Lawrence as love goddess and Earth mother, depicting instaed a strong-willed, independent-minded, creative woman who broke every social and sexual taboo of her time. It takes us through Frieda's tumultous life, from her aristocratic Prussian childhood through to her first marriage to a staid English professor in Nottingham, her wild affair with the cocaine-addicted psychoanalyst and free-love advocate Otto Gross, the scandalous abandonment of her husband and three children for the love of a coal miner's son who would become one of the 20th century's greatest novelists, to her years at Mabel Dodge Luhan's artists' colony in Taos, first with Lawrence and then with her third husband, the handsome if hapless Captain Angelino Ravagli. Frieda appeared in every major novel Lawrence wrote during their 18 years together, from The Rainbow to Lady Chatterley's Lover. She was his most trusted reader and she had an anti-intellectual sure-footedness that helped shape one of the most famously embattled unions of the century.

Title: A Genius for Living: Biography of Frieda Lawrence

A Genius for Living: Biography of Frieda Lawrence