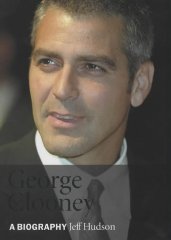 Near fine/VGC.Virgin Books,2003.First UK edition-first printing.Black hardback(silver lettering to the spine) in near fine condition, with Dj(tear on the edge of the back Dj cover,a couple of scratches and nicks on the Dj cover) in VGC.Illustrated with b/w photos.Nice and clean pages as new with a couple ink marks on the outer edges, two small creases on the edges of the pages.Nice ane clean book except for the tear and light shelf wear on the Dj cover.252pp including Sources and bibliography,index.Price un-clipped.

Product Description: A-list celebrities don't come much bigger than George Clooney. Film star, producer and director, Clooney brings the Midas touch to every project he takes on. Directors queue to shoot his next picture, actors take huge salary cuts to appear alongside him, producers bend schedules to accommodate his every need. But it wasn't always like this. When hospital drama series ER hit American TV screens in 1994, George Clooney finally achieved the overnight success that he'd been working solidly towards for more than a decade. As maverick paediatrician Dr Doug Ross, he won over the hearts of millions, finally putting behind him the gruelling and often demeaning years of selling women's shoes, cutting tobacco and appearing in more than a dozen pilot episodes for series that were never made. Next stop Hollywood and starring roles with Nicole Kidman, Brad Pitt and Julia Roberts. This title offers an account of how this unassuming, good natured and good looking guy from Kentucky became the hottest movie star and the world's most eligible bachelor. But there is so much more to Clooney than good looks: from his pivotal role in US television's post-11 September charity telethon America: A Tribute to Heroes, to his controversial decision to take on the tabloids on behalf of all actors, and stories of his stepping in when bullying directors have attacked a co-star. George Clooney has been proud to stand up and be counted when it mattered. He takes press intrusion in his stride, still has the same pre-fame friends and has never forgotten his roots. He doesn't conform to normal star behaviour. But then George Clooney is no ordinary star, as this biography aims to reveal.