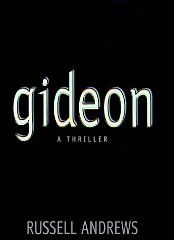 Review: Gideon is a high-concept political thriller by Russell Andrews (the pen name of a partnership between book editor Peter Gethers and mystery novelist David Handler). n nWhen a promising New York writer named Carl Granville is paid a quarter of a million dollars to produce a novel called Gideon, he thinks it's his lucky break. The book is to be based on the material of an old diary--which Carl is allowed to look at, although certain dates and names have been blacked out. The diary and novel involve a 10-year-old Southern boy who killed his brain-damaged baby brother. Carl, baffled but glad of the huge payoff, gets on with translating the diary into a bestseller. But when the editor who commissioned the book is murdered, and nobody at the publishing house knows anything about the Gideon project, the writer realizes that sinister forces are at large. Just to add to his troubles, Granville is accused of the editor's murder and is forced to go on the run to escape the FBI and an assassin. His only chance for clearing his name is to reveal who wrote the decades-old journal. n nGideon is an invigorating read with a remarkably fresh plot and a highly likable and believable protagonist.